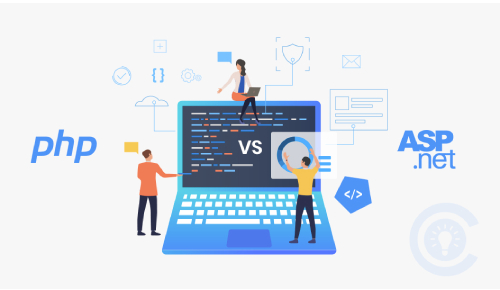 We all know that PHP and ASP.NET both are quite popular languages in the programming world as both have broad bases and used by a number of developers.

In today’s article, we will discuss the key difference between Asp.Net and PHP and which one you should select for your next application. Before we start let me give you a small definition of both languages PHP and ASP.NET.

An open-source project that has evolved over the years. With PHP code there are a number of popular databases that can be integrated efficiently with PHP code. The PHP code is processed by a PHP interpreter that is implemented as a module in the webserver.

PHP is consequently lightning in its execution. When compiled as an Apache module on the Unix side its execution works smoother on the Unix side. The web server combines the result of executed and interpreted PHP code that could be of any type which includes images also.

PHP supports a number of protocols that include IMAP, LDAP, and POP3, supports for distributed object architecture and JAVA, for the first time in the PHP ecosystem makes multiple tier development.

A lot of free and open-source libraries include in PHP in its source distribution.

We can say a comprehensive software infrastructure and other services that are mandatory to build a robust web application for computers and mobile. The Asp.Net framework provides amazing support for HTML, CSS, and JavaScript.

The ASP.Net built on CLR – Common Language Runtime that allows a programmer to write code using any supported .Net language. It provides a lightweight and faster way to combine server code with HTML.

A robust framework using which developers can write any type of application or can use any sort of style for creating an application.

Core Difference Between PHP and ASP.NET :

A server-side scripting language that is designed for web development known as PHP, which is efficiently utilized to manage dynamic content, session tracking, and building e-commerce websites.

Now, Have A Look On Key Differences Between PHP Vs ASP.NET :

After reading this the question arises that Cost-wise which one is better PHP or ASP.NET?

PHP is an open-source development framework whereas ASP.Net charges some fee for hosting. The fee charged by Microsoft owned ASP.NET is not high but makes developers skeptical towards ASP.NET.

To outsource the ASP.NET mobile app development services is another great way.

ASP.NET framework has the most amazing set of libraries and is a straight application framework and PHP is a mix between a programming language. ASP.NET comes along with a lot of features but all these qualities come with a price tag in the form of a license fee.

Both PHP vs ASP.NET works efficiently and required functionality suites to their taste hence to develop your next mobile or web application just connect the best mobile app development company Concetto Labs.

Also, we are aware that ASP.NET MVC is the next generation of the proven ASP.NET technology platform from Microsoft hence connect today ASP.NET MVC Development Company like we are to grow your business with our professionally developed applications as per your requirements.

What is SSRS in Msbi Technology